If you walked by Scott Courtyard on the evening of October 19, you were met by bright lights, a long red carpet, and rows of seats filled with enthusiastic audience members there to watch Live 2 Free’s second annual Fair Trade Fashion Show.

Like the previous year, this years fashion show featured vendors of both fair trade and second-hand clothing and jewelry, but the event also included something new: a discussion panel of speakers involved with the Fair Trade Movement. 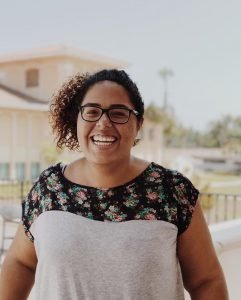 French is a strong advocate for Fair Trade products and voiced that passion on a panel that was newly added to the Fair Trade Fashion Show.

Vanguard senior and Live 2 Free president Jazmyne French was a panelist along with Ed Westbrook, Professor of business and law, Elisha Chan, Board member of Fair Trade LA and Debbie Rupard, Ambassador for Noonday Collection. All participants spoke on the Fair Trade Movement and labor trafficking, why they were involved, and how an individual could help.

Rupard was particularly enthusiastic about the movement, and anyone who decided to get involved.

“Once you discover Fair Trade, it’s difficult not to become a part of it,” Rupard said.

Because people need jobs with fair pay, several panelists also brought up the way that the Fair Trade movement connects to other world problems, such as poverty.

“The key to ending poverty is job creation,” Chan said.

Each of the panelists offered different insight into the horror of labor trafficking, from their individual perspectives, and experiences in their field of work. French stressed the importance of Fair Trade in the effort to end trafficking in the workplace.

“Every person deserves to go to work and not fear that they’re going to die that day,” French said.

The fashion show itself began directly after the panelists finished speaking. Unlike traditional fashion shows, which feature collections aimed at a particular season, this show featured clothing that could be worn at any given point in the year, and every outfit was modeled by one of 40 volunteer Vanguard students. According to French, many of the students were able to chose the outfit that they walked in.

The first vendor showcased on the runway was Plato’s Closet, a second-hand clothing store located in Costa Mesta. The variety of outfits featured from them were for both men and women, and primarily displayed denim, graphic t-shirts, jumpsuits and a few light jackets. Following Plato’s Closet was Elisha C., Citizen and Darling, and Noon Day collection, with accessories and pieces of jewelry from Peace Exchange, Purpose Jewelry, and Vida Verde.

Live 2 Free came up with the idea for a fashion show last year, at the club’s leadership retreat, out of a desire to educate students about labor trafficking and Fair Trade fashion. In a matter of only six weeks, they were able to get ten vendors to feature on the runway. This year, the club began planning the show in late July, and Vanguard was even able to supply them with fair trade food to serve at the event, according to French.

Both this and last years events began and ended with an opportunity for the audience to shop from the vendors showcased on the runway, following the idea expressed in the panel, that every dollar the individual spends can make a difference.

“Every time you spend money, you are paying for the world that you want to live in,” Rupard said.

Samantha De La O is a senior at Vanguard University. She is an English major with an emphasis in creative writing, and her interests include fashion, photography, and 20th Century American Literature.