On September 28—two weeks after Vanguard got the green light from Governor Newsom, a select number of classes were allowed to meet in-person once again. I was one of the lucky ones as one of my classes was approved to meet on-campus. As I walked across campus, my bag thrown over my shoulder, I felt an overwhelming sense of nostalgia.

How amazing is this, I thought. I’m walking to my class in Heath Academic Center on a Monday night. Just like old times.

While the old me would have vastly taken it for granted, (I have never once been excited for a three-hour Monday night class) the new me has learned to celebrate the small victories. Every store that reopens, every restaurant that now allows dine-in seating, is a victory worth celebrating. If nothing else, this year has given me a sense of appreciation, or rather, shoved it down my throat.

I opened the door to Heath 109 and eagerly took a seat in the third row. The small group of around ten of us was staggered throughout the lecture hall—all at least six feet apart. Everyone wore a mask, too.

I’ve learned over the course of this pandemic that you can tell a lot about a person by the type of mask they wear. For example, if it’s one of the disposable masks, this person may probably forgetful and constantly losing their masks. Or, they’re too lazy to buy an actual mask so they’ve been stretching out the complimentary mask the grocery store gave them for nearly a month. If they’re not wearing it over their nose or even not wearing one at all, that tells you almost everything you need to know. It’s a fun game I play in my head each time I’m around a group of strangers: make silly assumptions based on how they respond to the mandatory mask mandate.

I was pleasantly surprised to see that everyone in class was wearing their mask correctly. I was also surprised at how engaged I was—I never once zoned out because I got too comfortable on my couch or was staring at a screen for too long. I asked questions, I laughed, I learned, and then after an hour and a half, I walked home. While I couldn’t turn my camera off and grab a snack from the kitchen, show up for class in my pajama pants, or enjoy any of the other perks of distant learning, being in a classroom with people was amazing. It was like a teaser trailer for what’s to come: a sense of normalcy in a world where things seem to dramatically change every second of every day.

Months ago, when the reality of the pandemic consisted only of whispers and of what-if’s, my roommate told me, “Everything going on in the world right now is so crazy. Honestly, all I really want is a good old taste of the mundane.” If only she knew. 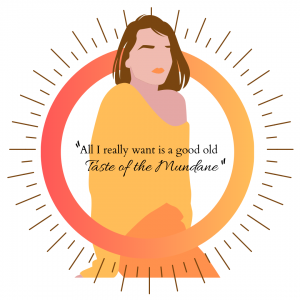 Soon, we were sent home, forced to learn what quarantine meant, how to make DIY masks, and figure out how to get along with our families. Everything in our lives seemed subject to change. As the world only got crazier and crazier in the months to come, we would frequently joke that what we wanted more than anything was normalcy, even if it’s boring: a taste of the mundane.

After attending my first in-person class after months of Zoom lectures, I feel as if I finally got it. 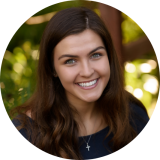