Live2Free hosted the annual Solidarity Sleepout in Needham chapel on Nov. 5th as an informative night of hearing experts speak out against youth homelessness. While this event happens every year, what is hardly expressed is the student body talking about their experience. As an event surrounded around educating students about the issue of homelessness, it is important to hear their voices in experiencing it themselves—even if it’s just for a night.

Professor Bob Abnair and senior Kaleigh Lawernce introduced the event and spoke about the effects of homelessness. They emphasized how coming together to bring awareness and solutions is key in order to combat the growing existence of homelessness–especially within the Orange County community.

Aside from having speakers and announcing winners in the raffle, the main affair of sleeping outside. Due to colder weather, students and staff slept on the inside–all expect for senior Chelsea Mascareno.

“I believe that students should experience this event because it definitely humbles you and makes you realize the challenges and struggles that you go through, though difficult in the moment don’t compare to someone who struggles to find their next meal or place to sleep,” Mascareno said.

Mascareno, who attended the event at first for extra credit in one of her classes, found herself quickly taken with the message and overall found herself changing her perspective on the sleepout.

“I would say the biggest take away would be to bring awareness. We sadly live in an individualistic society where we want people to take care of our problems, but then never stop to listen and hear others’ problems that they are facing,” Mascareno said.

A portion of what was talked about during the talking bits of the event elaborated on raising rates of homelessness, as well as about students on campus who struggle to have meals and sleeping situations.

Despite the initial reasoning behind attending being selfish, Mascareno was humbled and welcomed the experience.

“My overall experience with the students and staff at the event was amazing. Professor Abnair spoke that night and I was just amazed at the amount of knowledge and information he had from previously working with homeless families,” Mascareno said.

Towards the end of the event, as everyone began to sleep. the reality of sleeping outside hit Mascareno. She realized that, while this was for one night, this is the constant reality for homeless folks around not only the Orange County area but greatly within California.

“I hope that there is change. I know God is doing great things with Vanguard and using people to create a pantry for staff and students…I could not be happier for the small changes because these small changes mean that there will be bigger changes,” Mascareno said.

The overall hope for this annual event is to continuously bring awareness and focus on the reality of homelessness, for those on and surrounding campus. The illusion of being in university may mask the reality of ongoing struggles that students who don’t have stable living or food situations have. Bringing awareness is the first step to combating the problem and hopefully start the process of fixing it. 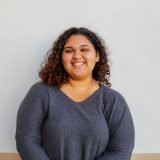 Leah Rodriguez is a Communication major with an emphasis in Public Relations. Rodriguez is just a struggling college student who drinks too much iced coffee and spends her days either lost in a book or in the process of writing another short story.