Movements begin with a passion and a plan. The president of Live2Free, senior Kaleigh Lawerence, has both. In her daily life, the club’s values drive Lawrence’s ethical approach to be a consumer and pushes her to implement what she learns and lead by example within her position.

Vanguard University allows Live2Free to be a grassroots movement within Costa Mesa’s community, according to Lawerence.

According to Lawrence, Live2Free is an anti-human trafficking club that gives opportunities to students and the community to learn about human trafficking and give people tools they can use to fight against it.

“We want to empower students to be informed and aware,” Lawrence said.

One of the ways they do this is with their annual Fair Trade Fashion Show. This event allows a large group of volunteers to learn and engage with the Fair Trade market in order to put on a fashion show.

“I think freedom is being able to make a choice that is optimal for you, for your community, and for your planet,” Lawrence said.

The event allows many individuals to learn about ways they can positively impact the lives of those who do not live in freedom.

According to Lawrence, volunteers of this event go through an education process that helps them learn about what labor trafficking is and what they can do about it as consumers. Those who volunteer invite their friends which allows even more people to be exposed to new information.

Live2Free was able to partner with Orange County’s Human Trafficking Task Force for this annual event.

According to Lawrence, Live2Free strives for prevention and partnership in everything they do. The club also goes into high schools and churches to give presentations on human trafficking—both globally and nationally. They also give a pragmatic call to action to those who listen.

According to Lawrence, she hopes to expand the attendance of Live2Free events and meetings so more people can learn about human trafficking.

“I want to see some change, and I want people to be treated properly,” Lawrence said.

Her passion for justice, awareness, education, and student empowerment drives her in the fight against human trafficking.

“I’m passionate about making sure my life is not harming other people,” Lawrence said.

According to Lawrence, her passion for Live2Free led her to Vanguard from the time she was in high school. Now as president, Lawrence wants to continue to expand the reach and vision of Live2Free.

“As a club, as a group, and a[s] [a] community, I want to see us move forward together,” Lawrence said.

Live2Free takes action as a club to empower and educate those who come in contact with the club. Lawrence’s passion pushes this club to touch both students and those within the community around the university. 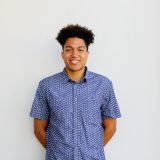 Christian Wilson is an energetic and joyful basketball player who loves guitar and has a heart for people. He loves learning new things and coming up with ways to apply them. Wilson also loves deep conversations and sushi.