Vanguard’s men’s soccer team hosted the national GSAC tournament in Irvine this November, with 200 tickets purchased by Vanguard to make the event available for students.

From November 26 to December 1, 16 teams from around the country that gathered at the OC Great Park Soccer Stadium located in Irvine, California for the first time. OC Great Park Stadium is the home of Orange County FC soccer, a club soccer team right below Major League Soccer. The Golden State Athletic Conference (GSAC) has not had a tournament in California since the 2008/2009 academic year, when it took place in Fresno.

Vanguard is one of the founding members of the GSAC;. This year’s conference was sponsored by Vanguard, as next year’s will be as well.

Jeff Melton, Assistant Athletic Director of Events and Communication, explained that Vanguard has received a bypass to the tournament this year because of the outstanding record the team has had for its regular season.

Since the conference was so close to home for many Vanguard students, Vanguard has decided to buy 200 tickets to the men’s soccer game in Irvine so that students could attend and cheer on the team as they take on the tournament. The Office of Student Engagement and The Roar hosted a tailgate party at 5:30 on Tuesday, November 27 outside of the stadium. The tailgate included music, face paint, pizza and soda for the students. The first 100 students that signed up on the link received a free visor.

On Monday, November 12, it was confirmed that Vanguard’s men soccer team would play at 6:30 P.M. on Tuesday, November 27. Vanguard was automatically bypassed to the tournament after their game against Arizona Christian University.

“In past years, the tournament has been in Florida and their host team isn’t that great, and they would usually lose in the first round so they don’t have too many fans. And it was just weird playing in an empty stadium, doesn’t really feel like a national tournament. Having it here under the lights and the crowd cheer behind us, it was huge,” Gould said.

Since the Vanguard’s spirit team made an appearance at the tournament, Gould explains how the Roar had an effect on the team’s game.

“Even though we did not get the win, we definitely played harder because of the crowd,” Gould said.

The GSAC national soccer tournament will be host again in Irvine next year, where Vanguard’s soccer team hopes to return again. 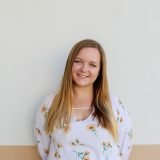 Maddie Bertrand is the Business Manager and Photo Editor for The Voice. She enjoys spending quality time with people and has a passion for exploring new places and going on adventures. One of Bertrand's favorite places she has traveled to is Ireland, and she is looking forward to traveling back to the UK to England, Scotland, Ireland, and France this coming March. Even though she was born and raised in the midwest, Bertrand is a California girl at heart and loves warm weather and the beach.