Costa Mesa’s community gathered on Jan. 30 at the Vanguard women’s basketball game to honor the late NBA star, Kobe Bryant, for his impactful presence on campus.

According to the police briefing on Sunday, a helicopter crashed in Calabasas and all nine people aboard died, including Bryant.

Bryant often practiced in Vanguard’s gym by himself and with his daughter’s, Gianna Bryant, basketball team, Mamba.

“The gym was available for him… It was convenient for him to be here, 10 minutes from his house. You know, he liked it and he parked right there and walk in that door, and it was safe. Nobody bothered him,” said Russ Davis, Vanguard University women’s basketball coach.

“We had weights at night last year and so it was really cool because we’d step out of weights and see him [Bryant] coaching… it was cool to see him on campus in general, but wed try to respect his space, “ said Senior Hannah Holder.

There was a ceremony held to honor Bryant before Vanguard’s women’s basketball game on Thursday, Jan. 30. The game was Davis’ first back after battling throat cancer, and Bryant was going to try to make it to the game, according to Davis.

The Pit, Vanguard’s gym, was filled almost to capacity with people packed in front of the doors. There were gold and purple balloons around the gym and flowers next to posters and Bryant’s Lakers jersey.

Before the game, Davis gave a speech honoring Bryant. “A lot of people were getting teary-eyed from everything he has been saying because it has just been a really hard journey for him,” said Junior Taylor Radtke about Davis’ speech. During Davis’ speech, he invited team Mamba to stand and honor Bryant, Gianna, and their teammates.

The Vanguard women’s basketball team wore Mamba shirts during the game, and both Vanguard and San Diego Christian College waited 24 seconds at the start of the game to take a penalty in order to honor Bryant’s number, 24, and his ‘buzzer-beater’ shots.

Empowered by the ceremony honoring Bryant and his influence on basketball the Vanguard women’s basketball team won the game 78-41. 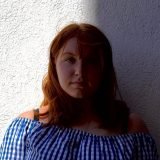