SGA released a new model of their constitution, aimed at better reflecting the culture and needs of students, which was put up to vote this past week.

This new constitution transfers current positions to the new House of Representatives and add seats for two commuter, two athlete, one transfer, one STEM, and one fine arts representative.

“Students don’t identify with their class as being a freshman, but rather living in the Laguna dorms, so adding athlete or fine arts representatives will help students connect,” said SGA president, Ariana Lopez.

Elections for House seats will be held in same semester that representatives will serve their term, rather than the semester prior.

“Over the summer we lose the excitement and forget who is fulfilling the position, but now so much marketing and campaigning will help those to be more involved,” Sophomore Senator Paisley Quitoriano said.

Lopez and her advisor, Ellie Kaiser, were given the idea for a revised constitution at the American Student Government Association conference. There they were inspired to create a stronger, student-based model from examples of different college constitutions and a private meeting with the president of the conference.

“My hope is that this new change is interesting and grabs student’s attention, that they take advantage of voting week, because we need their vote in order for this to pass,” Lopez said.

SGA is excited to implement these changes if this model of the constitution passes into office, but even if it does not, they will continue to look for strengths the team might need in the future.

“The constitution isn’t perfect, but shaped in a way that is going to be adaptable for the new SGA members to transform it for the current culture at Vanguard,” Facility Senator and senior Truman Fischesser said.

Required office hours for representatives will also be reduced under the new constitution. Current senators are required to serve 10 hours per week, but this will be lowered to three hours.

“I love the lower hours because my primary job will now be only to represent the voice of the students rather than more administrative duties,” sophomore Facility Senator Brittney Stephens said.

Representatives will now be considered volunteers rather than paid staff, because of their lower hours per week, which SGA hopes to clarify in upcoming job descriptions.

“Senators often find their jobs to be ambiguous as it is difficult to understand what concerns each class such as freshman, or junior, they deal with rather than the entire university as a whole, as this is what everyone wanted since their pay is low,” Lopez said.

Senior Amanda Enzenauer wanted to join SGA as a freshman, however she never applied because of her fear of not being selected.

“I am super stoked about this change, because I have always thought SGA to be an exclusive club because of the limited positions, yet now they are adding more, which will make our student body feel as though they have a voice,” Enzenauer said.

In the past, only the president of student government would be allowed to have private meetings with President Mike Beals, the provost, or department managers, to voice the concerns or suggestions of students. Now the entirety of the SGA team will have the opportunity to be included in those meetings as well.

“I love the perks of being a small college as I have the opportunity to connect with the higher departments as they allow us to have a platform to speak upon important issues,” senior and Multicultural Senator Dominique Paredes said.

The members of SGA meet weekly to brainstorm ideas to strengthen the board as a whole, while prioritizing top issues.

“During retreats, or meetings we will have these random bursts of laughter as we are such a tight unit that it feels like I’m working with a family who, is constantly encouraging everyone to grow in their positions,” Quitoriano said.

Sophomore Cassidy Desmore, has seen a lack of enthusiasm on campus for the student government, as it isn’t viewed as very important.

“I hope that these new changes with adding more positions for all students will create more of a healthy competition that is needed to keep students interested,” Desmore said. 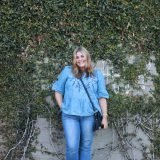 Jenna Leigh Condon is a junior at Vanguard University. She is an English major with an emphasis in journalism, in hope of becoming a high school English teacher. She enjoys blogging, Gilmore Girls, and has a whole lotta love for chocolate croissants.