A baseball player who was not ready to stop chasing the dream now finds himself in Sydney, Australia. Born and raised in California, Vanguard alumnus David Stone met the game of baseball for the first time at age 12, and found a passion for life beneath it all, “It kind of defined who I was as a person, along side with God” he says. Throughout the years Stone has dealt with his struggles, but solitude always seems to be found out on the field.

“I don’t even know where to start really,” Stone began, “I came from a Christian background.” Raised with Christian ideals and a musical gift to match, Stone put his abilities to work on the stage as well as on the field. Leading worship on the Hope Chapel Youth Team, Stone began to find his own meaning in faith instead of living out his faith in lukewarm ways. “Before high school I was just doing it [being a Christian] cause. I didn’t have any passion behind it” he says, “I didn’t know the meaning really. I wasn’t old enough to really understand it, even though I said I did. I still didn’t. Once high school came that’s when everything changed.” At this tipping point in Stone’s life, Cedar Crest played a large role. “Going up to camp, up to Cedar Crest, that was pretty big” he says, “I saw friends which went to that church, so that was a huge part of that. Just keeping each other accountable.”

Though Stone began to find meaning in his faith, God never promised it would be an easy journey. Stone continued to pursue his love for baseball at Irvine Valley College. “Two years of that [junior college] baseball was pretty brutal” he says, “We’d lift at like five in the morning before class, four days a week, and then I’d be at school.” This is just one example of how being a student athlete requires mental strength and physical sacrifice. “So I’d have to drive 30 minutes to get there in the morning, freezing cold; and then we’d have lifting and then I’d have class right after until baseball; and then we’d have four hours of practice after; and then, finally, I would get to drive home in traffic, which was great. You know? It was just everyday and that was for two years.” Hard work pays off though. After Stone’s two year mark at Irvine Valley, he was recruited by Vanguard Baseball, “I was interested right away. It was an easy decision for me, just ’cause it was local. I wanted to be more towards the beach and more towards family.”

“The professors there were horrible. It just was not fun. They never made it fun. They were never interactive. They never cared about you that much, except for maybe a few of them, you know?” he says. Compared to Vanguard, “I feel like every professor, or about 90% of every professor that I’ve had, have been all super interactive and very caring for you.” Stone elaborated on academics, as well as his senior year of baseball at Vanguard. Ringing in his final year of eligibility, Stone received the Charles Berry Hustle Award following the 2015 NAIA World Series.

With Stone’s senior year of baseball at a close and another year of academics left before graduation, he came to a crossroad. Continue playing somewhere else or finish up school?  “Just really thinking about it. I just didn’t want to stop baseball.” Former Vanguard teammate, John Collins III, had come to a similar conclusion when it came to giving up the game and soon found himself playing in the New South Wales State Baseball League for the Penrith Panthers. A year later, Stone and teammate Bret Collins, decided to follow suit. Stone is now playing first base and right field. With no real time pressure, Stone ensured that he would come back to finish his degree, he just is not in a rush.

To Stone, baseball is more of a life source than a game. “It taught me how to by on a team. How to interact with others. How to get over defeat” he says. These are all valuable lessons to learn in life, yet the most striking statement from Stone is about perception: “You fail 7 out of 10 times and that’s considered good.” Being raised off this ideal ensures maturity if you can handle it. “You don’t wanna throw your helmet, ’cause that’s a way to show that you’re weak” he says, “It taught me to be strong. Be a strong person, not more dependent.”

Stone has been playing baseball in Sydney for eight months now, which is a big change for someone who has lived most their life in the Orange County and LA. Being so far from home is a whole new experience for Stone but he is taking it in stride. “It’s been eye opening. It’s been different. The people out here, the accent, the culture, food, pretty much everything, honestly, from living in the ‘OC Bubble’” he says.

Stone’s number one fear is to not play baseball anymore. “I don’t want that day to come” he says.

Even though Stone has ‘Plan B’ planned out, baseball will always be the dream, but not the only one. He has hopes to travel and surf up and down the coast of California. Go to Nicaragua. Go to Alaska. After going so far, he says he is open to anything. Either way, he says, “It’s all good.” 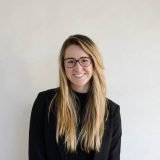 Rachael is a marketing major on the brink of May graduation. She is an avid runner, fashion blogger, chocolate connoisseur, and roommate therapist on the side. Writing has always been an expressive out lit for her, but as her passion for life has grown, her main topics of writing have focused in on fashion trends, women's rights, and the growth of young professionals.