60°F
Home ⇒ Opinion ⇒ Does the Genre of Fantasy Belong with Christianity ?

Does Fantasy Belong with Christianity?

The debate over fantasy literature and whether or not Christians should read it has been going on for years. Concerns about witchcraft and occult-related concepts seem to be what alarm Christians the most. Parents with younger children have been known to censor reading material in hopes of protecting young minds from bad or even seemingly demonic influences. The ethicality of series like Harry Potter have been debated for years by the Christian community for its elements of witchcraft.

Yet, what stops Christians from seeing and appreciating Biblical themes in even secular fantasy books like Harry Potter? Additionally, Christians truly believe in miracles and the magic performed in the Bible– so why is the fantasy genre so different from that? Fantasy is arguably acceptable for, and even at times exceptional at, conveying Christianity’s themes in literature. Which begs the last question of: What origin does fantasy come from, and what is at its core?

Themes of redemption, forgiveness and resurrection fill secular books, and who’s to say if their inspiration was Biblical or not? While there is literature that is blatantly atheist or even anti-Christian– not all secular books are as such. Literature can be viewed with a Christian lens so to speak, which dictates how one interprets a book. Contrastingly, if one is not a Christian– they can interpret Christian books in a secular manner– all according to their personal perspective of life.

Harry Potter, for example, delves into themes of love, loss, family, and friendship– each of which can be seen as moral and even inspired by Christianity at times. Harry Potter himself has been seen by some as a Christ figure, with his sacrifice for others mirroring that of Jesus’. The struggle between good and evil in the series, by itself, can be arguably very Christian. Fantasy is used both for entertainment and allegory in this way.

Dr. Laurie Hatch, Associate Professor of English, who teaches a majority of the Literature classes at Vanguard, including a C.S. Lewis and Tolkien class, states that:

“When I define literature– again, very broad– people disagree all the time, I usually would use Stephen Greenblatt’s definition. Basically, he defines it as a technology. He actually says it’s the greatest technology invented to capture human experience. I’m loosely quoting, but that is probably the best definition. You could disagree; and when people hear that literature is a technology they tend to go ‘what, why is it a technology’ but it changed the way we see – the way we express human experience instead of just talking to each other– we’re telling stories. We’re trying to express emotions in a different way. So that’s how I would define literature.”

With literature being a device and fantasy, perhaps, being a technique of the device, can either be intentionally detrimental to intellectuals? Perhaps, it all depends on one’s analyzing lens. Afterall, there are an infinite amount of them. Literary analysis is influenced by one’s personal experience, background, personality, etc. as well as criticisms that can be applied to it such as a feminist, psychological, marxist, formalist or any other number of lenses.

Fantasy, just another lens to view themes from, can be viewed in any way a person chooses. Christians can add their own meaning to it according to their faith, through a Christian lens – even if it is a secular piece of literature.

Lewis and Tolkien intentionally use fantasy (and even sci-fi in Lewis’ case) to convey Christian messages. Lewis is very overt in his use of Biblical allegories, while Tolkien is much more subtle in his themes. There are also more current Christian fantasy writers that take on a variety of styles. The Wingfeather Saga, for instance, takes readers on an otherworldly journey with both love and loss. Nothing is blaringly Christian, but the heart is felt behind it. Is using the concept of magic the only thing frowned upon?

Magic is seen negatively by Christians because of its possible ties with witchcraft. However, they often seem to forget that Christians writers use magic in similar ways. They also fail to remember that magic is not far off from what Christians expect of God.

Dr. Hatch makes an interesting point in saying that:

So, if the fantasy genre is merely a lens and technique used for conveying themes in literature, and the concept of magic is Christian in its very right–what else can be protested?

“There’s magic in Tolkien and Lewis, and if you’re going to reject magic in literature–which I think you can make an argument to do–a very legitimate argument, you gotta reject it in all literature–which probably means yes you’re not going to be reading fantasy. That also means you’re going to be missing out on a lot of Medieval works that are heavily steeped in Christendom, that are deeply, deeply Christian and no one would have a problem reading those.”

This brings us to our third point, which is the examination of how fantasy is actually Christian in a lot of its origins.

Lewis and Tolkien are most well known for fantasy and are considered the modern fathers of fantasy by most. Before their time, fantasy still existed– though in the form of fairy tales, folklore and Medieval romance. Like the origin of many things, fantasy’s origin is not easy to pinpoint. Yet, we can look to what influenced the modern fantasy writers and trail the line of writers back through history.

“[Tolkien] is steeped in medieval literature. And most of that literature is heavily steeped in Christian values and ideals.”

She goes on later in saying that:

“A lot of Medieval literature, which influences fantasy, is deeply Christian because that was their entire worldview. It would have been unthinkable for them to have a different worldview, other than the Christian one. And again, Medieval–Tolkien and Lewis were Medieval scholars. If you’re looking at the origins of any sort of genre–what did the originators–what were they influenced by? That is what they were influenced by.”

Maybe individuals fail to realize how interwoven Christianity has been with fantasy from the beginning. The Bible is full of stories being told to convey God’s message to us. Who’s to say Christian themes cannot be conveyed through genres other than nonfiction? Additionally, as Christians, we know God works His will through all sorts of people and methods of teaching– why not the genre fantasy?

It’s important to be cautious regarding all that we intake as Christians. In the world, there are increasing amounts of evil material out there that intentionally tries to be anti-Christian or even supportive of demonic practices. Still, it’s necessary to examine each source of information individually to see its true intentions, before condemning an entire genre or section of literature as evil. You can decide how much you want to absorb of the world and mediate the amount of secular sources you consume. Yet, Christianity can be at the core of your reading experience even in secular literature, if God is at the core of your heart. 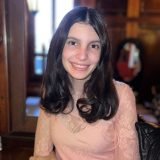