What happened to the language courses offered? As students, we should have the opportunity to learn the different languages that we are surrounded by every day.

Until two years ago, Vanguard offered a Spanish course to students, but it was recently eliminated due to conflicts with student enrollment.

The school has encountered conflicts in the past that not enough students were interested in taking a language course. This has resulted in low student enrollment in the courses.

Students need to realize that there are many jobs and companies that are drawn to people who know more than one language.

Since the university is growing in population, there will be more students who may potentially be interested in majoring or minoring in a language course.

Having a language course re-offered to students would provide them with more opportunities to become immersed in different languages and cultures that could end up benefiting them in their future beyond college.

According to Dr. Laurie Hatch, Associate Professor of English, she supports that universities should encourage higher education in another language.

“Students should have some exposure to another language since we are a global community,” Hatch said.

The ability to be bilingual should not be overlooked. Because of how much demand there is due to global expansion, having a second or third language can nurture a lifetime of effective communication. It does not matter which career field that one chooses to move into, no matter where they go, they can put to use their skills of being able to communicate further than others may be able to.

According to Dr. Hatch, unlike many other universities, Vanguard does not require students to have taken a foreign language class prior to entering college. This gives the university more reason to offer more language courses.

According to Dr. Hatch, most graduate programs require some facility and knowledge of another language. By not offering many language courses at Vanguard, it restrains students from being able to get into their desired graduate program.

It is surprising that there are so many events, chapels, and clubs on campus that have to do with embracing diversity, yet students are not interested in moving more in-depth with languages and become further immersed in the very basis of all cultures.

Students are given the opportunity with the Global Education Outreach Office (GEO) to study abroad and experience other cultures. What a difference it would make if the students who signed up for a study abroad had some prior knowledge of the language and were able to use the skills they learned at school to communicate with the native people in the country they are visiting?

Senior Yokabet Paulos is majoring in Sociology and minoring in Music. She had been enrolled in the Spanish course with Professor Tamara during her freshman year at Vanguard.

When you learn a new language, a new world of opportunities opens up. It can change the way that people view things and situations for the better. Students should recognize that being fluent in more than one language opens doors in countless different fields in the world outside of school and they can become extremely benefited with knowledge and practice of another language.

Previous Post
Dr. Sandra Morgan: From Vanguard to the White House
Next Post
Think Before Joking About Mental Illness 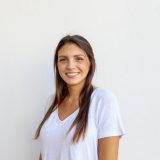 Francesca Vanni is a Communications major with an emphasis in Public Relations and a writer for The Voice. Vanni loves to travel or go on adventures on her free time. When she writes, she enjoys sitting outside in the sun with a cup of iced coffee by her side.