Jeff Bussell did not know he had a sister, not until his parents told him at age 20 that they had once given up a baby girl for adoption. After looking for her for four years, Bussell made contact and began to build a relationship.

His sister gave him a Bible and took him to church events, which sparked something in him to pursue God with more passion.

“I felt like there was something still missing in my life,” he said.

Bussell, Vanguard’s new Director of Athletics, then dedicated his life to the pursuit of God.

A typical day for Bussell begins with prayer and does not start really until coaches start showing up. Without his life-changing experience with his sister who lead him to have a deeper walk with God and others are also influenced by him, he would not be the leader he is today.

He found Vanguard two years ago when he joined the athletic staff as the Senior Associate Athletic Director.

The previous Director of Athletics, Rhett Soliday, stepped down to focus on coaching basketball and leading the “Invest in Gold” campaign, which presents the community with the opportunity to invest financially in the athletic department.

For Bussell, everyday in the role of the Director of Athletics looks different. He views it as more than just a job, but as a type of ministry.

“I love being in a place where I can impact people and God could use me,”Bussell said .

As a department, Bussell wants to continue to glorify God through all they do both on and off the field and court. His vision is to see girls and boys become men and women that become great parents and a great asset to others they encounter for the rest of their lives while getting an education here.

Bussell also wants to build structure so that they are able to totally invest in every student athlete. The number one goal for athletes is to get their degree, and he wants to make sure that students complete their goal with a Christian worldview, that would allow them to go make an impact in everything they do,

Bussell said seeking God daily in everything they do and developing men and women for the future is a huge part of their goal as a department.

Through that, Bussell believes athletes could thrive on and off the field. Student athletes are expected to get a 3.0 GPA. The department has been averaging a 3.1 for the last couple of years. He is dedicated to improvement for his athletes as they become men and women of the faith even past their collegiate athlete years.

“I want them to know success is hard,” Bussell said 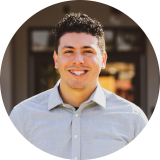 He currently serves as SGA President.