The Lions walked away victorious in a PK shootout against Biola but it was not easy by any means. On Saturday, November 5th the Lions took on Biola in Vanguard’s first round in the GSAC Tournament. The high stakes game started out very intense as the future of both teams relied on this important game.

Juan Arellano did not hesitate to put the Lions on the scoreboard as he scored off an assist from Jared Gould within the first two minutes of the game.

Due to a penalty kick, Biola put their name on the scoreboard almost three minutes after the Lion’s first goal. Halfway through the first half Biola scored again making the score 2-1.

Within four minutes of the second half of the game, Arellano scored for the Lions thanks to the assists from Ivan Azepita and Nathan Miramontes, thus tying the game again to 2-2.

The next thirty minutes were hard fought and filled with scoring opportunities for the Lions and the Eagles, however neither team was able to capitalize on them.

After a long period of neither team scoring, the Eagles struck through with a goal and made the score 3-2, Biola’s lead. The time was about to expire and Coach Dodge decided to sub in Miramontes, a regular center back, as a striker for the last few minutes of the game. Miramontes became the deciding factor in the game when he rose up out of nowhere, leading the ball that was hit from Jose Castillo, for a tremendous header that pierced the back of the net for Vanguard and tied the game at 3-3 with only five minutes left.

With a tied score at the end, the game went into overtime for the next twenty minutes. With Vanguard at a 5-1 lead in shots, Igor Puglia, goalkeeper for Biola, managed to block eight shots that were attempted by the Lions.

With no game winning goals, the game then shifted into the penalty kick round.

Miramontes dipped the first goal, followed by Biola’s Kousei Mattox who also scored. Several saves were made by both goalkeepers as the score followed to still be 1-1 in the PK shootout. Arellano was up next and swiftly shot the ball and made it to the back of the goal making it 2-1, Lions lead in the PK round. Brandon Gomez managed to block the Eagles kicks shot after shot.

Sammy Mckay was up to hit for the Eagles as Gomez blocked it. Intensity grew as Gomez took his place on the field to give the final penalty kick. A hush fell over the crowd and the tension could be felt in the air; a season’s worth of joy, frustration and anticipation all lead up to this moment as Gomez lined up his shot. The fierce level was at a severe high. The referee blew the whistle and as Gomez took his shot, elation and relief washed over the Vanguard team and fans as the ball swooshed into the net taking home the golden win for the Lions. Vanguard was victorious one more time. Biola’s season ended as Vanguard advanced into the GSAC tournament.

The Lions are scheduled to play next at Biola on November 10th for the GSAC semifinals. 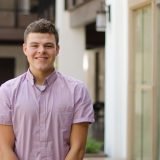