The novel coronavirus has undoubtedly created many difficult challenges for people across the world — even for people at Vanguard University of Southern California. The way student life and other activities related to Vanguard’s campus had to change. One unique organization on campus that had to navigate through this pandemic is the Student Government Association (SGA) and its President.

The role of the SGA President is to be official representative of the study body. The president also manages the executive board, oversees SGA as a whole, and attends meetings with university President Beals and Vice President of Student Affairs, Tim Young. The SGA President also chairs the Executive Board meetings. These roles have been the same for years; Though, some things had to change due to the COVID-19 pandemic.

He said when things were in person it was easier to just approach students to ask them about their experiences at Vanguard, but since classes are online, it’s harder to get input from students in general.

President Contreras also said that, “ a lot of students are facing Zoom fatigue”. Which makes it harder for students to attend town hall meetings, forums, and other SGA gatherings because the only alternative to meet with students is online. Many students would not likely be free willing to attend more forums after attending a full day of class.

President Contreras said that even though his administration has faced many challenges as a result of COVID-19, he has been able to manage the situation by creating new habits to make his day more efficient and effective. About President Contreras’ personal life, he said, “I used to go to bed at 2 a.m. so I try to go to sleep at 12 p.m. and wake up at 7 a.m. Implementing those habits to get enough sleep.”

He also said, “also getting out of my pajamas is good practice. It is easy to not roll out of bed, but being able to get dressed you are ready for the day may seem small, but it has been a great habit to practice for! For zoom meetings, I put a Zoom shirt on and I feel like all of these new habits have definitely helped with my mental health.”

Other self care routines that Contreras has been able to put into practice has been keeping his community with friends and having dinner with a friend every week. He also said switching his phone for a book has been very helpful.

President Contreras stands out for many reasons, and now being the first Vanguard University president to serve through a major pandemic is one of those reasons.

When asked what message he wanted to relay to the student body he said,

One of the biggest things in this season is to remember God is on the Throne. It may feel like a cliche, but it is true. Our situations may not seem like that is true, but he is. It is hard, but I think God is welcoming us into that space of reality to ask if God is on the throne. With all the brokenness in our lives, it is hard, but I think God is inviting us into that space, and My first chapel I spoke on pain and bringing our own pain. It is what it is but it is not what it seems and that God is on the throne. He sees where you are at. He wants to grieve with you. If we lost even the in-person class experience and the commencement, God in our grief and wants to He grieves with us.

President Contreras is facing the end of his two years as SGA President. In May of 2021, after he graduates, he will see his successor, Junior Matthew Holgate, take the role of being Vanguard’s next SGA President for the 2021 – 2022 term. 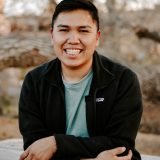