There are numerous denominations and church backgrounds represented at Vanguard University, and therefore numerous theories, concepts, and ideas as to what worship music should be. Content, style, intent, and other aspects of worship music are used by the university’s community to decide what makes a song considered worship music.

“When I felt called to worship, I actually went to Bible school because, to me, what we were declaring in worship was so much more important than just the sound,” Casarez said.

According to Casarez, accurate theology is crucial to have in the content of a worship song. Worship songs are declarations sung corporately. These songs are affirmations of who God is and His attributes, they speak of His goodness, love, and power.

“When we have these songs that are declaring, that are ministering those things, and a reminder of who God is, those make [for an] amazing worship song,” Casarez said.

In addition to content, Dr. Park, Assistant Professor of Theology and Ethics, explains that there are three criteria that need to be met for a song to be classified as a worship song: collectivity, godwardness, and singability.

It is these elements that make a worship song different from a Christian song, a good song, and all the other types of songs, according to Park.

“In regards to corporate worship settings, the melody [style] has to cause you to be in awe of God. It is very cultural,” Bohnert said.

It is not wrong to play a worship song that fits a different style of the cultural norm, according to senior and worship leader Briley Neyenhuis. This change in style, however, must be addressed to the congregation. Otherwise, the different style may become a distraction and a hindrance in worship.

Some churches are repurposing secular songs as worship songs. An example of this is Bethel Church Worship taking the song “Ain’t No Grave” by Johnny Cash as a worship song. Is this appropriate and can those songs be defined as worship music?

“In the context of a worship service, it would be an unconventional thing to do. My concern is the heart behind it. In also doing that, you have to take into consideration your congregation,” Neyenhuis said.

It is important to consider one’s own congregation when deciding whether or not they should use secular songs, according to Bonhert. Another consideration to make would be the meaning of a specific song within its secular context, as that song may carry a meaning that may not be appropriate in a worship context.

“[Worship songs] have an element of praising God…secular songs fundamentally, don’t really do that. If you have already been exposed to that song…it’s hard to think of it in a new context,” Bohnert said.

While there is debate over repurposing secular music, a growing debate is the repurposing of celebrities.

Recently Kanye West, a famous secular musician and artist, released his album “Jesus is King” and has publicly committed his life to Christ. Is Kanye, because of the very recent dedication of his life to Christ and his lifestyle beforehand, meeting the Christian church’s requirements to lead worship?

“I think there is a process of how people will have more access to leadership roles as they grow. But how do you put a timeline to wait? God is such an individual God. We do have systems in place to filter through that, but I think it would be better to walk alongside them as they are doing,” Casarez said.

How are public figures supposed to be kept accountable by the Christian community if they claim to be Christians?

“It is hard…the form of a local church is very important for the health of a leader…and function of a local church, can help stabilize and keep accountable [Christian] public figures,” Park said.

In the case of Kanye, he has sought out a pastor and has shown humility in seeking guidance in his faith and his ministry, according to Park.

The question of what defines worship music draws a diverse range of responses, ideas, theories, and opinions depending on the individual answering. 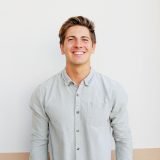 Bradley Brown is an amateur rhetorical analyst and serves the Vanguard community on The Voice as a staff writer. Brown enjoys talking about Jesus, philosophy, art, music, weightlifting, and politics. Brown is currently a senior and is preparing for the giant leap into the next thing after school.