Emilee has a story that is very different from many of us. At only 20 years of age, Emilee has experienced so much in her life; moving around multiple times, serving as a missionary in Fiji, and starting school.

Emilee is currently a sophomore here at Vanguard University and is studying Communications. This is her first year at Vanguard, and while it was not always the top school on her list, she felt drawn to Costa Mesa and also had a friend who attended Vanguard and loved it. Everything that Emilee needed to happen for her to attend Vanguard lined up perfectly. Emilee is now at the end of her sophomore year and is going to be a Catalina RA next year. Emilee is excited to be able to be there for her residents to listen to them while creating a family environment on her floor where all the girls are there for one another. She is excited to build relationships with all of them and see all of their relationships with one another develop.

Emilee grew up moving every 3 years of her life, so she does not really have a city that she can call her home town. She was born in Hayward, California but then moved to Albuquerque, New Mexico for a short period of only nine months. They then relocated to Fresno until she was ten years old. Her family then moved to Visalia and Temecula for three years in each city. Emilee’s family is currently located in North Carolina. Emilee’s family moved so frequently due to her Dad’s job as a banker, that required him to be flexible and relocate so often. She was not always a fan of the changes that came along with moving so frequently but her close relationships with her brother and 3 sisters helped make it easier. Emilee now recognizes that it prepared her for the rest of her life. She now loves change and has many aspirations for her life.

Emilee’s original dream, when she was younger, was to attend NYU Graduate School and study law to become a lawyer. However, she was set to go to UNC-Wilmington in North Carolina. Three weeks before she was set to leave for school, Emilee felt the Lord speaking to her to apply to do missions. She originally felt a desire begin to form while she was visiting the Caribbean with her family and reading a book series by Christie Miller. It was in this book that she read about a girl who went to England to serve and found a huge passion for orphanages. After reading this book Emilee knew that this what she wanted to do, but she was conflicted only being three weeks away from moving into her dorm. Despite the school deadline she sought the Lord in prayer and looked for ministries that she could go through. She saw on one of her friend’s Instagram account that she was going to serve in Fiji for 8 months, and Emilee proceeded to message her to get more information about her trip and organization. As they started to talk, Emilee’s friend told her that they were going to work in schools, assist the elderly, and simply help in the communities and villages around Fiji. After her conversation with her friend, Emilee felt the Lord speak so clearly to her in a way she had never experienced before saying “This is where I want you. Go!”

Emilee was hesitant at first since she had to pay for school and was only three weeks away from leaving to move into her dorm. Emilee thought of other ways to serve, thinking about winter break and her summer. Emilee continued to hear the Lord speaking to her saying that he wanted her to go serve in Fiji, so she applied to the organization being only 3 weeks away from the time the team was leaving for the trip. After Applying, Emilee got an email telling her that she was accepted to go the day before her school payments were due. From there the Lord was present as everything lined up with her visa, finances, and most importantly her parents being on board with her heart to serve. Emilee was in Fiji for 8 months and mainly worked in a special needs school and a primary school. This was something that Emilee never necessarily felt called too, but was radically changed by the time she spent with them and described how amazing and joyful they were. She was able to love on these children, teach them English, and help them learn other subjects.

While Emilee was there, she was able to hike to the top of the tallest point in Fiji. She described how she felt connected to God whenever she was in nature. “Every time I get to the top of a mountain I am so blown away by how artistic our God is. And with that, look at how big our world is and how much detail our God put into this. Now think of how much detail, love, and uniqueness he poured into you and how much more He loves you than these vast landscapes. He blows me away every time.”

When Emilee was asked about her future aspirations, she said that her ultimate dream would be to incorporate photography with missions and build up a church in Europe. In 10 years, she would love to help build up churches in Europe to bring light to a spiritually dead part of the world. Thank you for listening and be sure to get to know Emilee if you have the chance! 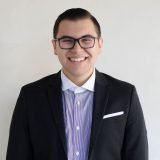 Andrew Is from Las Vegas, NV and is now a Communications Major at Vanguard University. Andrew enjoys hanging out with friends, drinking coffee, and traveling in his free time.